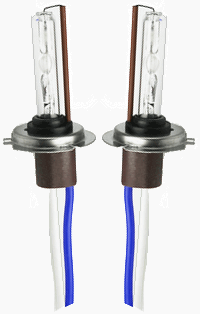 Luminous efficacy is the measure of how much light is produced versus how much energy is consumed. HID headlights give higher efficacy than halogen bulbs. The highest-intensity halogen bulbs, H9 and HIR1, produce 2100 to 2530 lumens from approximately 70 watts at 13.2 volts.

An HID headlight can produce up to 3800 lumens from approximately 42 watts in stable operation. The reduced power consumption means less fuel consumption, that equals less CO2 emissions for vehicles fitted with HIDs. Not much, but it’s a fact.


Some manufactures only fill the HID bulbs 20% full of Xenon gas to cut costs and quality is vastly different between HID ballasts. Buyers should do comparative research.

The limiting factors with LED headlights presently is created by LED operating characteristics, which are — focusing light at long distances and (HEAT) primarily.

An LED is dependent on its temperature; a given diode will produce more light at a low temperature than at a high temperature. Thus, in order to maintain a constant light output, the temperature of an LED headlight must be kept lower and stable.

LEDs are commonly considered to be low-heat devices with small, low-output LEDs used for electronic control panels and other applications that only need small amounts of light; however, LEDs actually produce a significant amount of heat per unit of light output. 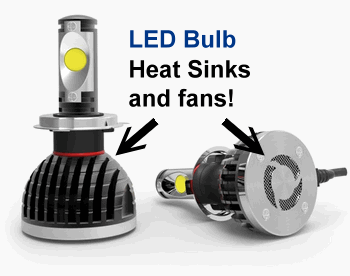 HID Headlight Facts — An LED’s heat is produced at the rear of the emitters. Unlike incandescent and HID bulbs, LEDs are damaged by high temps. Prolonged operation above the maximum temperature will permanently degrade the LEDs and shorten the LED bulb life substantially.

As LED technology continues to evolve, LED headlights are predicted to improve and perhaps one day surpass that of HID headlights. But we’re NOT there yet. HID headlights as your automotive lighting solution is still a wiser choice!


Now that you’ve read HID headlight facts, see the advantages of our HID upgrade conversion kit on our main page.